This topic is about particles which move in a straight line and accelerate uniformly.  Problems can vary enormously, so you have to have your wits about you.  Problems can be broken down into three main categories:

• To answer this question, you will need to use the four key formulae intelligently.

• It is important to know the second of these equations off by heart; the others appear on Page 40 of The Mathematical Tables.  Secondly, you may be asked to derive either of the last two equations from the first two.  Practise this.

• These four formulae will be useful elsewhere (for example when doing Questions 3 and 4 on projectiles and connected particles).

Remember that the above formulae may be used only while the acceleration is uniform.  If a particle speeds up, but then travels at a constant speed, and then slows down, the above formulae cannot be used for the entire journey.  In these cases we solve the problem by drawing a time-speed graph, with time as the horizontal axis.

There are four key points to remember about time-speed graphs:

• The area between the graph and the time-axis represents the distance travelled. 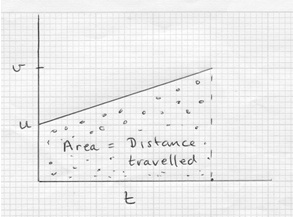 • The slope of the graph represents the acceleration.

• If a particle starts from rest, then v = at  [i.e. the final speed will be the product of the acceleration and the time.] 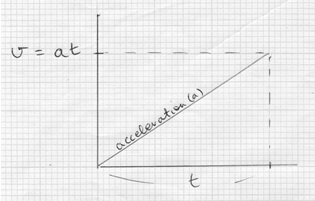 • If a particle accelerates from rest for time t1 with acceleration a and immediately decelerates to rest in time t2 with deceleration d, then t1:t2 = d:a 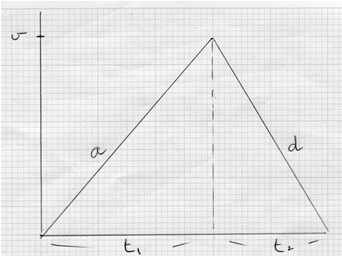 • If particles P and Q set off together and later overtake each other, then overtaking will occur when Sp = Sq  .  If, however, P was 25 metres behind Q at the start, then when overtaking occurs,
Sp = Sq + 25

• If P and Q are a distance l apart and move towards each other, they will meet when  Sp + Sq = l

Common mistakes made in doing this question are:

• Assuming that the particle starts from rest, even though this is not stated in the question.

• Using the formulae where they do not apply.

• Jumping into the question before giving it enough clear thought.

• Not drawing a clear time-speed graph.